Go get your bard on!

Well this week has started better for me than last week! I submitted a few pieces yesterday for publication (shall I be rejected?) and am devoting an hour, at least, tonight to work on my collection of plays!   It’s been edited ( an interesting process for me that I’ll blog about later this week) and now I’m just tweaking it before I put it up as an ebook.

I’m under no delusion that this will NOT be a great commercial success, but the plays have all be produced by various theaters and I’m just ready for them to reach a wider audience. So hey, what the heck, right?

Anyway, I meant to post this video last week, but as I previously posted, I had an awful week, so today shall have to do. It’s a very interesting video. I suggest you take a look!

Today is a mash-up day for me.  I just finished work (at my “real job” ), now it’s time to squeeze in a quick blog then off to workout, write and study for my GRE (for my pursuit of my Doctorate’s).

Inspired by this, I thought I’d share a collection of english/literature related links I’ve found over the last few weeks, including a shakespearian take on Star Wars and a giant, albeit slightly creepy statue of Mr. Darcy. 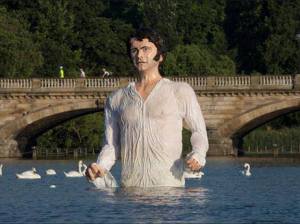 In an effort to drum up interest in a new TV channel called “Drama”, this statue of Mr. Darcy has appeared in Hyde Park before finding a permanent home in Lyme Park (where the scene it depicts was film.) Personally, I would rather the statue resembles Matthew Macfadyen, but still a 12 statue of Mr. Darcy is pretty darn impressive and it is a great photo opportunity, especially for those like me who love vacations to see road-side, or in this case, lake-side attractions.

2) What can you do with library books? Why dominoes of-course! And that’s just what one library did, constructing a world record domino chain of books. This is every 5 year olds dream. Oh, who am I kidding, I’m 27, and this would be dream come true for me as well:

3) Every had a bad flight? I haven’t personally. I’m still a plane virgin and unnatural terrified of the air (looking at you Twilight Zone and William Shanter)…..But for those who have sat hours in a cramped metal tin calledan airplane with crappy movies and oddly microwaved objects, people swear to you is food,  this letter  is for you.

And last but not least.

4) Sometimes two things come together, so unnaturally, like the shy, nerdy boy in high school,  who musters his will to perform a techno dance on stage during the annual Christmas, but forgets his glow sticks, leading to 8 minutes of him whirling his barren hands in the air to a bad beat, that you are entranced. Even if you wanted to look away, you couldn’t.  So it is with a Shakespearean take on Star Wars.

Two things which never should go together, yet, Ian Doescher found a way to combine them, rewriting A New Hope in iambic pentameter . I’m undecided if the work translates to a train-wreck or pure brilliance but either way I can’t look away. His book is available through Quirk Books.

Warning, this does have foul language. It is also pretty hilarious. See what happens when two literary giants compete in an epic rap battle (of history)