Good afternoon, Rachael!
I wanted to drop a quick note to you with good news!  Your monologue “The New Girl” has confirmed entry into Volume III of ‘interJACtions: Monologues from the Heart of Human Nature.’  Congratulations!
This greeted me in my inbox today! 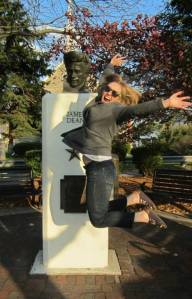 I was very excited to have this monologue published. It was originally a short story which I wrote during an exercise at University of Indiana.  It’s a dramatized piece about my experience of switching from a private Lutheran school (15 people in my class, all girls) to a public school.

Hopefully this year will continue to be a productive year for publishing (both indie and traditionally) for me!

Publishing is a game. You learn that early in your studies if you go through an university. Be it an scholarly  journal or creative writing, it’s all hoops you have to jump through to establish yourself and further your career. And the more you become engrossed in it, the more you realized it’s not just about talent, but who you know and how much press they will get for publishing you…..

Why is it that way? Because they say so.

Now, I’m not sure who they are. Though I suspect it might be the publishers and those profiting off of mine and yours work….

I also think that’s partly why being an indie writer is so looked down up.

Ok, we will get it out of the way. The problem with vanity press is that anyone can do it. And frankly there are so god-awful works that in my opinion see the light of day. There are also a lot of scams, and publishers that try to hide that you will be footing the bill,  so if you do wanna pursue vanity press, research it and do it because you want your work out there…..

But if you do self-publish in any form, expect to be look down upon for it.

“Oh you’re an author, who published your work?”

That might be my least favorite part about the writing game. This weird need that most artist have to inflate their own work at the cost of others. I remember excitedly telling a professor of my first real publication (in a fairly respected online journal) only to have him brush it aside….*in a stuffy accent* “well if you’re still writing and publishing when your forty, then we will know you have what it takes to be a writer”….just to have him a few months later blow up my Facebook feed with how amazing the journal was and blah blah blah because his wife had a poem published here….

….Don’t even get my started of a few of my friends who decided to start their own journals…..Somehow editing an online webpage and calling it a journal must turn nice rational people into cut-throat, pretentious snobs. Stories. So many….more than I care to share of how the publishing/promotion game has soured perfectly nice people.

It’s like all writers are perpetually stuck in high school, insecure jocks that have to pick on everyone else around them in a desperate attempt to hide the fact that they aren’t gods among men.

But that wasn’t always the case. In the 19th century it was common for established writers to pay for publishing their own books.

(A stolen bit for Wikipedia for you from their vanity press article. Let your “More you know star”shine:)

In the nineteenth and early twentieth centuries it was common for legitimate authors, if they could afford it, to pay the costs of publishing their books. Such writers could expect more control of their work, greater profits, or both. Among such authors were Lewis Carroll, who paid the expenses of publishing Alice’s Adventures in Wonderland and most of his subsequent work. Mark Twain, E. Lynn Harris, Zane Grey, Upton Sinclair, Carl Sandburg, Edgar Rice Burroughs, George Bernard Shaw, Edgar Allan Poe, Rudyard Kipling, Henry David Thoreau, Walt Whitman and Anaïs Nin also self-published some or all of their works. Not all of these well-known authors were successful in their ventures; Mark Twain’s publishing business, for example, went bankrupt.[6]

Ernest Vincent Wright, author of the 1939 novel Gadsby, famous for being written entirely in lipogram, was unable to find a publisher for his unusual work and ultimately chose to publish it through a vanity press.

(By the way, if you go back to the early early days of publishing, there are way more writers that are well known that used vanity publishing at one point or another in their career…but anyway back to my own thoughts.)

But the truth is that success or failure is not guarantee your art is good. Emily Dickinson had only a handful of poems published in her lifetime, still she is greatly studied, admired and remembers. Yet, Ursula Guin’s A Wizard of Earthsea which was immensely popular in the 1970’s and was later borrowed heavily upon for a certian scared-wizard series is  almost completely forgotten.

Time and people can only tell us how art stands the test of time and who it can affect. As far as I can see, the more art that is out there, on any level, the more chance for us to grow and discover. And how do you measure success? Frankly, if one poem/essay/play/story I write helps one person, then I consider it a success. And when you consider the ripple effects, well, it’s hard not to make a case for more art in this work isn’t it?

In short, yet blogs, indie publishing and vanity press have no standards. They are the mutts of the art world. But it is still art. And some of it is darn fine.

So if anyone gives you crap for being , a self-publish artist or vanity press artist, tell them at least you had the guts to do something with you life and put yourself out there.

All of this makes me just want to run to my piano….the piano doesn’t judge me!

Rant over. Time to get back to playing the game and self-publishing. I have college applications to finish, journals to submit to and the finishing touches on my Nook Book.