Blame the LARPer in me, but I am a huge Halloween nerd. Usually I manage to stretch the day out to a week and average 2-3 costumes per year. This year  I have two of my costumes set (Boo Berry and Duela Dent) but I’ve also stumbled upon some great literary costumes and thought that I would share them with you. 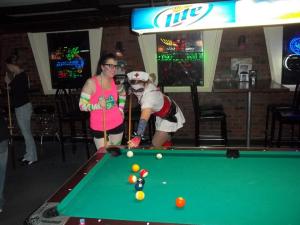 Nothing screams also parent like dressing your child up like a literary figure!  Barnes n Nobles recently suggested 16 different book inspired costumes. Some, I’ll admit were a bit of a stretch but others were so cute. My favorites:

I won’t lie. Most of my teenage Halloween costumes involved the dead genre, dead zombies, dead prom queen, dead….well you get the point. Never, did I even think to emulate some of my favorite literary characters. But teens of today, need not fear, foreveryoungadult has come up with a great list of costume ideas!  I might even steal a few of the ideas myself!

There are some amazing literary costumes! Agh! I can’t wait to stretch my Halloween out to incorporate them especially, a Slaughter House Five outfit!  Writer’s Digest also came up with an amazing list. (The Lord of the Flies pun,  Animal Farm outfit and Lady MacBeth, might just be my favorites).

Do you have any ideas? Have you ever dressed up like a literary character for Halloween?

Well with giving myself two weeks to get a cosplay outfit of Harley Quinn done for Halloween, I realized that I did not have enough hours in the day to do this justice or right but still pressed on. Amazingly, I finished it in time for last weekend, and even won 2nd place at the local bar’s costume contest, and a 50 buck gift certificate! I definitely has some things to tweak before I go to a Comic Con (and this costume was not appreciated. Everyone thought I was a slutty/crazy nurse), but I was happy with the result!

I had found online that you could build duct tape boots off of sandals. However, after thinking about my skills, I realized this wasn’t going to happen…..

I took an old pair of knee high boots from good will and covered each with duct tape. (One was red and the other was purple. ) However, I had a problem. Harley Quinn had thigh high boots, mine were knee high . To fix this problem, I measured the height up to my knees, and then made a a duct tape strip that made up the difference. Once, I had the strip, I cut it out to resemble her boots and used black duct tape to accent it. If my boots had zipped in the back, I could have duct taped it in (it will hold securely without duct tape if your boot is tight, mine did but I wanted extra piece of mind), but since mine zipped in the back, I had to first duct tape the add on and fit it to my thigh, then place my boot on, and duct tape it together.

The look, though was amazing and only took a couple hours to complete.

I had originally wanted an actual corset out of duct tape (ribbing and everything), however I found myself working on it the day before I was to go out, so that was out of the question for me.

I decided to make a belt for the shirt I sewed up. I started by measuring my waste. I then made a belt that was about six inches small than it in the primary color red. Harley’s corset was red with a purple center. To make this look, after I had made the red belt, I made a smaller purple belt ( at 8 inches or so.), and duct taped it on on end (about three inches in) to the backside of one side of the belt. I then poked matching holes on each side and laced it up with red ribbon. I kept it loose enough to slide on and then used the lace to tight it.

The corset was tight enough to stay up on its own and the purple strip stayed in place, however, I wanted more security again. I taped the other side of the corset (the purple belt underneath to the red belt) and then made straps for the corset by cutting one long strip of duct tape in half and rolling it. I had to tape myself into it, but it really looked well and worked!

I used make-up for all of it, minus the white base which I used Halloween white base. For the mask, I used a black and a purple eye shadow, and used black eyeliner to sharpen the edges.

Do not use Rite Dye for dying the tube socks. It will not take. I followed the instructions and after dying it twice, my red one was pink, my purple one was sort of blue. I ended up using puff paint afterwards.  It did not work very well either. It was streaking, took multiple coats (I could only get two in with my time) and you should double the drying time.)

Anyway, for anyone wanting to make this costume, hope it helped, and if you have any questions, post here and I can answer them. I know this was a short account of how I did it.

Oh and HAPPY HALLOWEEN everyone!

For Halloween this year, I have decided to transform myself into Harley Quinn from Arkham Asylum. This might have been an easy task, however, I’m not someone who sews or does much with clothing. I’m also on a very tight budget.

So my journey to make a cheap yet awesome costume has begun. I started out by raiding Good Will, the mecca for anyone on a budget and trying to make an awesome costume. There I found the perfect white skirt and a blouse that will serve as a base my top.  The total cost was less than 10 dollars.

Last week, I used my sewing skills to shorten up the shirt. I started with a normal shirt, and tucked it up where the tails of it ended, creating a half shirt.  I am then going to construct a duct tape corset to attach to it.

Here is what I have so far.

I’ve also created my arm warmers and bracelets. I took two tube socks (5 dollars for two pairs) , and cut a circle at the big toe of each , a small circle. The directions I found online said to sew at the seems however, on my first test that failed miserably. You would have to have baseball mitts for it to fit your hand.  So my advice, find the big toe hole and cut a small hole and then go from there. After that, I put it on my hand, and cut off the sock right above my knuckles. It naturally rolled down. I let it and sewed it down to make a sort of border and to make sure it doesn’t unravel.

BTW don’t through your toe away (if you are making it like I am), you can use them to make a bracelet. Again, once its cut off, it will roll on both ends. Just let it and put a few stitches in it to have a bracelet!

Now I know they aren’t the right color, but this weekend, I am going to use rite dye to create the red and purple look.

I still have a lot left, so I will post you on the updates as they come.