I grew up with a healthy fear of schizophrenia, an unusual those probably not my strangest fear and given the family I grew up in, not without warrant.

My grandmother had a very late onset of schizophrenia (nearly thirty) and I grew up in the smashed shell that was her unintended legacy: a father who had essentially raised his five siblings. they would sit around and laugh, telling stories of the time, grandmother, thinking her daughter had been replaced with a robot sent to spy on her, chased the Aunt Bert around with a knife until my father wrestled it away.

Broken china dolls. Carefully glued back together, but the shiny paste still lingered in the cracks.

I was like her, my family said, with my wit, intelligence, and the art.

My grandmother had never been an artist, until the early days of her illness.  She would draw, everywhere.Elaborate murals usually of Disney characters. My father told me it was wondrous, as his childish eyes say it.

Until she started talking to the drawings.

And they answered her back.

I still wonder some days if there isn’t some correlation between art and madness. And though I have had nothing as severe as my grandmother, I have always been a bit off. From my carefree youthful days of car-surfing to my more turbulent twenties and my occasionally bouts of depression (which I can usually control with diet, exercise and meditation, those I have had to take medicine a few times.)

There’s an interesting article in scientific America talking about the history of mental illness in art. It’s worth taking a lot even at the sanest of times. 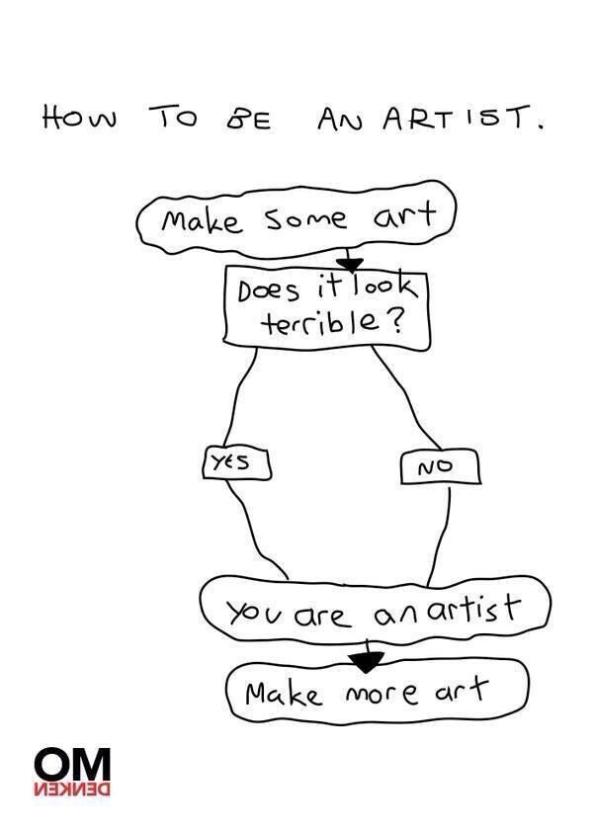 . Oh I knew it was wrong, but its just so easy to justify. (Hey I spend 100 on concert tickets, I can burn my friends cd right…..) Of course like all good pirates, I had boundaries. No stealing from indy or upcoming artists………

I say all of this to admit that on this topic I am a sinner.
Still, after a few conversations I’ve had with a few of the 101 Composition classes I’ve visited over the past semester, I’m shocked at the over all consensus on copyright law: copy right laws should not exist. If someone can steal work and make money off of them, the better for it….and well, hey you should just make more work to sell.

I was honest with the class. Telling them about my past, why I did what I did, why it was wrong but why I did it, etc….

I tried having them imagine that they were inventors and artist who had their work stolen….

What about indy artist…….

After hours of discussion, the consensus remained the same.

I’m not naive. I know (as Rand Paul) illustrates that there are certain people that don’t respect the idea of copyright laws, but I was still surprised to find so many people feel that the American way is stealing and that artist who have things stolen are just out of luck, should just stop whining and go out and make new work.

Any ideas how to impart the grain of discourse?

Go get your bard on!

And what a better way to celebrate:

You may have noticed that I have been gone the last few weeks. My father fell ill. And of course between hospital visits and tending to my mother this blog was not a priority. And last week, he took a turn for the worse and passed away. This was unexpected, even with his illness, a nasty auto-immune disorder, we were told to expect 3-5 years, and the day he passed, they were getting ready to release him. In short, it was a shock.

As you can imagine, I have been reeling. Being close to your parents is a double-edged sword.  I had 28 years of an amazing relationship but in its absence the void is staggering.

I was reminded at his visitation, but several of his friends that of all the things he loved about me, most, perhaps was my artistic drive. As one said, “don’t stop writing…” and even my father is his last months told me I was the artist he always wanted to be.  So after a week and a half of sitting around crying and mopping, I’m going to do what I do best, carry on and increase my drive to get my art out there in memory of my father with of course a good mingling of crying and mopping in between.

And because I think this is appropriate:

Do Not Stand At My Grave And Weep

I was one of those who fell into watching How I Met Your Mother; namely, I had Netflix and time on my hands. It wasn’t amazing but it was OK…..

In the end, I would call myself a semi-devoted fan, I liked it. I liked the characters, the story was ok, and by the end I just wanted to meet the mother…..

And like most fans, I found the final to be a slap in the face, and came away thinking, why did I waste my time watching this series, for this final. Not only was I disappointed but I was angry…….

I understand that this is the writer’s stories and as such they can do what they want, however; there were several mistakes which were made (which we as storytellers can learn from) :

1.Pacing matters: First, the final season’s pacing was way too slow. It was bloated. Instead of advancing the plot, the story turned to self-congratulatory and self-absorbed flashbacks.  But, within that, the writers of HIMYM spent a year of the viewer’s life focused on Barney and Robin’s wedding. What does this do? It focuses the viewer’s attention on the couple as well as created an investment of time and emotion in the development of the couple. Then, they promptly dissolved the couple within the first 15 minutes of the show. Oh you can argue well that’s life…but that comes to our second point:

2. Genre conventions: Sitcoms (or comedies) like most genres come with a certain set of expectations and conventions. You can break those conventions but you better have a good reason for doing this or face the readers/viewers wrath. The HIMYM final failed to have any real reason explained for this slide into drama.

3. Character Development: HIMYM spent nine years developing characters. Again it spent the better part of the year giving Ted the balls to walk away from the dysfunctional and cold Robin, and Barney the insight to heal his awful self-esteem and view of women, to again within the lesser part of the hour, have the characters slide back to their old way, for no real reason or purpose.

“Barney and Robin had issues because she worked a lot, so hey who cares that he spent the better part of two years trying to be a “decent” person, let’s just make him a slut puppy again because it’s funny!”

4. Reader’s (Viewer’s) Expectations: The title says it alone. This is a story of “How I Met Your Mother,” and the better part of nine seasons were spent building up this epic romance of Ted and his wife. Episode after episode allude to it. To then what, introduce her for one season, again building it for their meeting: One hour. One hour in which she promptly dies. And then the worst part:

5. Negating the entire point of the series: The final turned what was suppose to be a cute story about true love, into a pitch to Ted’s teen children on why he should date their “aunt” Robin, who Ted has apparently been pinning after, maybe all along. Instead of celebrating his love of their mother, she is relegated to a place filler that Ted might have been happy with, all while probably still harboring a flame for Robin. To make this worse, Robin spends half of the final lamenting how she should have married Ted (probably because within their dysfunctional relationship, she could do no wrong) while Ted is with the mother.

In short, the final rewrote the meaning of the series. This wasn’t a story about hapless in love Ted growing up and finding adult true love, rather it was about the inability of Ted to ever move on from a doomed and one-sided relationship with an egomaniac. Ted kinda comes off as a creep and a loser. And there dysfunctional relationship can now envelope to innocent teens…….